Sep 15,2010 - by Comments Off on Mercedes Benz E350 Cabriolet Review Price and other E Class cars 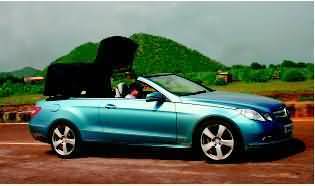 The Mercedes-Benz E-Class Cabriolet gives new definition to style and luxury this mid sized car will change the stats of this segment.

There is something about the open topped car,especially one which in true time honoured tradition was the epitome of grand touring in style. It was all about the splendour of traveling great distances in the country with the sun in your eyes and the wind in the hair experience. The best grand tourers were large saloons with a soft-top,which in effect made them convertibles (or cabriolet,the French term to having the cape cut off!),presenting all-weather mobility with a slice of panache and dollops of style.
Somewhere the large four-seater convertible went missing in the automotive lexicon though a few prestige brands yet kept the tradition humming – Bentley,Rolls-Royce,Mercedes-Benz,to name but three always had a large four-seater cabriolet in their model portfolio (not to be confused by opentopped two-seat roadsters mind you) and now even the likes of BMW and Audi are climbing on to this specialist bandwagon.
Recently,Mercedes-Benz ushered in its latest soft top cabriolet in the country – the smashingly sexy Mercedes-Benz E350 which is a stunner whether at standstill or on the move.

You do not want it to do anything more than just waft its way across scenic countryside,gobbling away the miles in serene soft paced manner,enjoying the vistas while the 272bhp V6 engine purrs away under the long sculpted hood. Of course with the ample 355Nm of torque on hand,brisk motoring is also possible but then this is a car which is to be enjoyed by all occupants in the manner intended.
For this very purpose,its maker has fitted it with an active aerodynamic deflector which is placed on top of the windscreen when the hood is lowered and concealed (automatically in the boot).

In Mercedes-Benz parlance,this deflector has been branded as the AirCap and it helps to deflect rushing air over (rather than at) the heads of all the four occupants of the car. If that is not all,it also helps lower the sound of the wind rushing at the four heads – simply amazing. AirCap is meant to complement the latest version of AirScarf,the system that Mercedes debuted some years ago in the SLK roadster which blows warm air on the back of your neck if you’re in the front seats. With AirScarf,Aircap,heated seats set to the highest of their three positions,and the side windows up,heck,you could drive the E-class Cabrio in relative comfort at any temperatures above freezing as long as there was no precipitation. The heavily insulated canvas top can be lowered or raised in only 20 seconds at speeds of up to 40 kmph. When it’s raised,you’d be hard-pressed even to realize that you’re in a convertible,so well does it seal out noise and vibrations.

The trunk itself is fairly roomy,at 390 litres. If the top is down,a rigid barrier in the trunk separates the cargo space from the top itself. With the top up,you can easily move the barrier down and out of the way,which makes it easier to load cargo. Factor in the same rock solid build of the Eclass saloon and its new found dynamics,the Mercedes-Benz E350 Cabriolet is a real sunshine car for the brand.
The rear-seat compartment,naturally,is a fairly intimate space,as passengers are staggered slightly behind the front seats,but there’s still room for a pull-down armrest between the rear seats,and the rear seats themselves are nicely sculptured,supportive,and comfortable. Rear legroom and footroom aren’t bad,either,unless you have a six-foot,three-inch driver in front of you.

While we can’t help but stress about grand touring in its truest essence,in India expect this to be a poser’s delight. One needs to be seen in it,of course with the soft top down and out and in such a scenario expect this to be in a garage as the fourth or the fifth car in the manor. Yes,there indeed will be homes which will take this car which sells for Rs. 65 lakh (ex-showroom Delhi) but then money is a trifling detail not enough to deter the well healed in letting their hair down,all in the noble “apparent” pursuit of gliding from home to the club. In this application,the E-class has few peers.