New Volvo’s S60 revealed in India as the new s60 will be officially revealed at the Geneva Motor Show in March 2009.

New Volvo s60 car is nearly similar to the S60 Concept.The front end is nearly identical,retaining the low, coupe-style roof line.Only small changes to the shape of the lights and a higher bonnet line differentiate the original car.New Volvo’s cabin with the same dashboard shape ,cantilevered rear-hinged rear doors as of concept car.

The S60 is based on the Ford EUCD platform underneath the body shell that is also used by the current Mondeo.

Volvo is promising that the S60 will be the “sportiest and most dynamic Volvo ever,” and the project’s engineers are understood to have been working on the driveability of the S60 since the project’s inception.

Unlike the previous S60, the newcar is more conventionally sized to give Volvo a true rival for the likes of the BMW 3-series. The old car was awkwardly-sized between a 3-series and 5-series, and was based on a cut-down V70 platform, although it was a sales success in the first few years of the car’s life. There was no estate version, either, but expect the new S60 to get an estate variant in 2011. 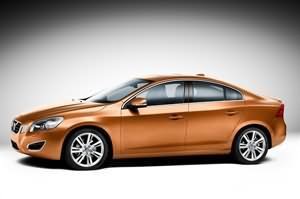 The car will also be the first Volvo to be available with the firm’s new Pedestrian Detection technology, which can “see” pedestrians in the road and automatically apply the brakes to stop the car if the driver doesn’t react quickly enough.

The S60 is also significant as it will be one of the cars Volvo is hoping to boost sales in the Indian market with new s60.