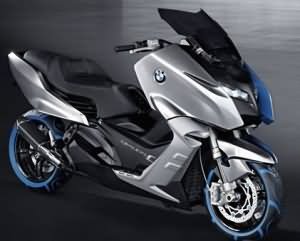 At the annual Milan Motorcycle Show (EICMA), BMW Motorrad introduced a new Concept C. This great Concept scooter has been proposed as an alternative mode of transportation in congested urban areas.

The high-displacement scooter will be powered by a new, two-cylinder inline engine mated to a continuously variable transmission (CVT). How much power this baby is going to put out has yet to be disclosed, but BMW states it wants performance to be towards the top end of the segment, so we anticipate it will at least be in the range of Kymco’s Xciting 500RI or Piaggio’s MP3 if not larger. Spent gases will be expelled through a short, sporty muffler mounted on the scooter’s right side.

The front’s exterior features a monolever mechanism with a hollowed-out shaft connected to a suspension strut, while actual suspension duties will be controlled by an upside-down fork. Damping duties on the rear will be controlled by a horizontally mounted single spring. The BMW Concept C Scooter also features a single-sided swingarm which leaves the sharp-looking five-spoke cast wheel in plain view. Braking duties are the responsibility of twin disc brakes with two radial calipers on the front and a single disc on the rear. The braking package includes ABS.

An attractive cockpit is infused with plenty of high-tech features. Rear view mirrors in the minds of BMW R&D are blasé, replaced by two LCD monitors connected to two rear-facing video cameras mounted right below the seat. Road speed, engine speed, and other data will be

Ergos on the BMW Concept C Scooter look about as upright and rider-friendly as you can get. displayed on a third LCD mounted in the center of the cockpit. There are settings for trip meters, audio and another map display that looks to be a built-in GPS.

Riding position on BMW’s concept step-thru scoot appears to be comfortably upright. No storage capacity is listed, but we’ll wager it will have an underseat compartment to stash necessities. Being in the conceptual stage, MSRP and when it might be available to the public remain trade secrets, but we’ll pass along further information as it filters in.