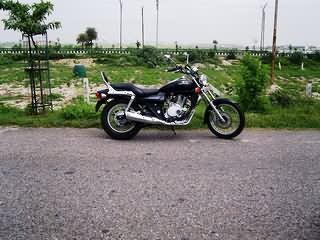 The Baja Avenger 200 cc DTS-i in a land cruiser from Bajaj Auto, priced between 64,830-72500 Rs. The much popular DTS-i engine from Pulsar can now be seen in the avenger cruiser. The bike has a 200 cc DTS-engine which generates 17.5 PS at 8000 rpm with a torque of 16.78 Nm at 6000 rpm. The present Avenger model with the 180 cc engine too uses the DTS-i engine. The new Bajaj Avenger 200 cc DTS-i engine allows it to gain a speed of upto 115 kilometer per hour. The bike has an oil cooling engine that protects oil thickness at high speeds. The 200 cc model of the Avenger is way ahead of the 180 cc model.

The competitor bikes like Yamaha Entincer were no where close to this style and power. The opening of the Bajaj Avenger 200 cc DTS-i was accompanied by an declaration that its manufacturing company, Bajaj Auto will slowly step away from the low-margin 100 cc bikes and foray into the more profitable and larger motorbikes segment. Company insiders claim that the 200 cc Bajaj Avenger bike will absolutely serve to enhance the pleasure of riding on the Indian roads. The roads are surely going to be on fire with this classic styles and looks of the new Bajaj Avenger.