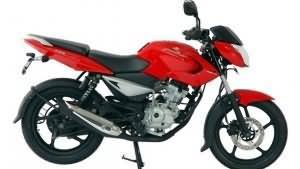 Bajaj has launched the 135cc Pulsar named as Pulsar 135LS.

Bajaj Pulsor 135LS comes with 4 valve engine,which is the first motorcycle engine that has 4 valves in India.The out put of this engine is 13.5 PS peak power at 9,000 rpm and 11 NM peak torque at 7,500 rpm. The weight of Pulsar 135LS is 122kg, which is as light as to support its engine power to compete with 150cc bikes.The engine is mounted as a stressed unit on a cradle frame chassis as on other Pulsor Bikes. The bike also sports clip-on handlebars, a step-seat, Nitrox shock absorbers, tachometer and digital speedometer with a fuel gauge.