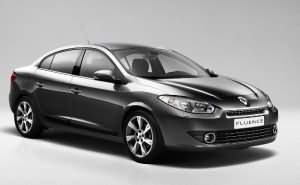 Ample looking with all types of comfort and all safety ingredients the car with all these features is none other but the Renault Fluence. Renault Fluence is available in two types of mechanisms i.e. Petrol and Diesel. The delivery of the Renault Fluence will be commenced from 22nd June, 2011 in India. The petrol engine availed with more features as compared to the diesel engine but the diesel engine is cheaper as compared to petrol one. We can see this car on the roads in three shades: white, black, biege and blue. Renault Fluence is not just a four wheeler on roads its much more then that its an Electric car in real.

No one can accuse Renault of living in the past this time. with the arrival of the flagship fluence saloon this month, the company hopes to banish any memories of the boxy Logan, with which it entered the Indian market four years ago. As you can see from the pictures here, the fluence is a good-looker and its also built to very high standards, and from what our test drive revealed, its a very capable machine on the road too. but more on that later.

the Fluence is quintessentially french, with chic and modern styling. It certainly stands out from the business-like styling of its European rivals and also looks refreshingly different from the generic Japenese styling, which we’ve seen for all these years. The shapely wheel arches, the flowing roofline and the striking headlamps all ensure that the Fluence is a looker. The 16-inch wheels and chunky 205 sections tyres help give the Fluence a bold and purposeful stance as well.

The petrol version comes in beige upholstery, while the diesel version gets darker looking black interiors. The first thing you’ll notice about the dashboard is the funky looking digital speedometer, which also houses the temperature and fuel gauge. It’s very easy to read and is flanked by the analogue rev meter on the left and the  trip information on the right.
The dashboard has a nice, flowing design, and the quality of materials is good. But the quality of materials good. But it still cant match tha Skoda Laura and VW Jetta’s materials, which feel much more robustly put together. The controls on the dashboard are not the easiest to operate though. The AC controls are too small, and the stereo controls are placed too low on the centre console, which means you’ll have to take your eyes off the road while changing the FM stations. Other irritants include the bonnet release in the front passenger’s footwell, rather than on the driver’s side (Renault obviously forgot tochange it for a right-hand-drive car). The handbrake is also placed away from the driver, and some controls which should be intuitive are difficult to operate on the Fluence. The steering-mounted audio controls are behind the wheel and not on it. The Cruise Control setting is on the wheel, but to activate the system, you have to use a button that’s between the seats – odd to say the least. The excellent visibility helps you forget these irritants somewhat though.
Space is good wherever you sit, but the sloping roof at the rear impinges on headroom at the back. The sloping roof has also made Renault lower the rear seats by a bit. The front seats get a rotary adjuster for the back incline adjustment, so it’s easy to find a comfortable position but they aren’t as supportive as we would have liked, especially the under thigh support. The rear seats are comfortable, with ample space for the three abreast and loads of legroom as well. The addition f AC vents at the rear on the petrol version is a big help (the deisel doesnt get these). other niceties available on the petrol include sunblinds, automatic clomate control and leather seats which the diesel version misses out on. The 530-litres boot is large by any standard and aids practicality too.

You can choose between a 1.5litres diesel with 105bhp and a 2 litres petrl engine will instantly impress you with its redifined nature and engine responsiveness from even low revs is brilliant. It loves to be revved and remains largely composed when you push it hard. You only get a Continous Variable Timing (CVT) automatic gearbox on the petrol engine and there’s no option of a manual gear box. But being a CVT, the Fluence doesnt show as much agility as its rivals. Dab the accelerated and the engine revs rise rapidly without any corresponding increase in the car’s speed. As a result, performance is below par. Zero-100kph comes up in 13 seconds, which is slow by most standards. Being an automatic also means that fuel efficiency won’t be great.
For those of you who want the benefit of low running costs, the diesel is the one to go for. Its the same engine that powers the Logan, but gets a sophisticated Variable Geometry Turbo (VGT), which bumps up power from 65bhp to 150bhp. The engine is a decent performer and noise levels at cruising speeds are acceptable. But that said, you are always aware that its a diesel engine powering the car. There’s a distinct turbo-whistle and diesel rasp around the 3000rpm mark. he engine performs well once past 2000rpm when the turbo kicks in. Below this mark, driving the diesel can get irritating with the engine slow to respond to throttle inputs. You get a six-speed gearbox to extract the best from this unit, but you will have to use the geabox judiciously to get the best out of the diesel motor. The heavy clutch doesn’t aid matters either.

But what impresses thoroughly is the brilliant balance that Renault engineers have found between ride comfort and handling prowess. The steering remains lightly weighed to aid low-speed maneuverability, but weights up consistently asspeeds build up,offering plenty offeedback from the road below. This gives you a good sense of control. the supple ride takes most bad roads in its stride transmitting nothing inside the cabin. The long wheelbase helps impart a feeling of stability at high speeds.

We can’t understand why Renault would offre the petrol version in only one fully loaded version with only a automatic gearbox. It’s a very refined engine alright, but what about someone who wants a manual gearbox? So clearly, the diesel is the one to opt for. It costs Rs.12.99lakh, which is around Rs.1.41lakh cheaper than the petrol, making it good value for money. It’s a car that has a  classy cabin, appealing style and promise of low running costs.