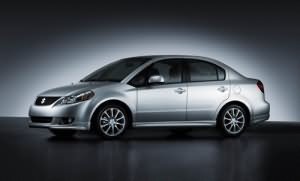 A real car which proves itself a value oriented car sensible in all round of drive test. Maruti Company is a well known company always promises and proves itself and fullfill all the demands of the buyer. When the company have the idea of introducing SX4 then the first thing which clicks on the introducers mind is the comfort of buyer with the great blend of performance and great mileage. The equipment used in the interior, exterior and engine of the car should be of good level. This is the features of the Maruti SX4. Suspension used in the car has been improved and now maruti ensures you to give the cofortable and luxurious ride. The car is very stylish its ample look separates it from its rivals. The looks and the technologies used in the car will give you a astonishing and revelry ride.
The previous SX4 wasn’t exactly known for its ride quality. But Maruti has tweaked the suspension and, as a result, the SX4’s ride ia a lot more pliant than before. At low speeds, the car tackles most bumps well and the ride is the most consistent of the three. The SX4 feels more planted. The ample grip from the 205-section tyres and decent feedback from the steering let you push the car through corners. but body roll is pronounced and takes some getting used to. But its never scary and the SX4 has the best overall ride and handling package in its test drive. The SX4 is also pretty well equipped with USB and aux input-enabled music system, steering-mounted audio controls, twin airbags and ABS. At Rs 8.67 lakh, it is also the cheapest here. Its fuel efficiency with 13.2 kpl in the city and 17.1kpl on the highway is impressive too. Maruti offers a warranty of 24 months or 40000km.

The SX4 isnt so wide as its exterior suggests while its headroom is good, legroom might leave tall passengers a bit disappointed. The high-set seats are comfortable, its really easy to slip in and out of the car. The large windows and light colours help liven up the interior and give it a cheerful ambience. Storage around the central console is good and the door pockets are deep enough too. There are also dedicated bottle holders in the rear doors. Boot space, at 505litres, is the biggest in this group. The SX4 has only a 1.3 litre motor, which is nearly 300cc lesser than its rivals. But surprisingly, it doesn’t feel slow and, infact, feels more responsive. Despite having only 90horses, the SX4 feels fleet-footed. By giving the SX4 shorter gearing compared to its rivals, Suzuki has done well to mask its power deficit. In-gear acceleration is where the SX4 impresses the most, taking 10.32sec to do 20-8-kph. But the downside of the short gearing is that you have to constantly use the five-speed gearbox to keep the engine above 2000rpm for best results. The engine is not as free-revving as the other two either.

The Maruti SX4 comes with a 103bhp 1.6 liter petrol and a 90bhp 1.3litres dieseloption, each of which have two variants to choose from. The base variantsfor the petrol and diesel come equipped with a centre room lamp, twin map lights, electronic power steering, power windows all round, a rear defogger, central locking and keyless entry. An information display, integrated stereo with remote four speakers and two tweeters, along with warning signals like a headlight- on remainder, door-ajar warning and a seatbelt reminder are some nice features. Along with the above kit, the higher variants receive climate control, a driver’s seat height adjuster, audio controls on the steering wheel ABS and EBD (with brake assist).

Price Comparison of SX4 in various cities of India