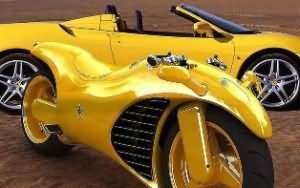 The Ferrari V4 bike has been designed by an Israeli industrial designer named Amir Glinik the futuristic bike is enthralling and captivating, it is powered by Ferrari Enzo engine handles are from F-16 fighter jet and buttons from Formula 1 race cars. One of the more unusual features of the Ferrari V4 superbike is is adjustable ride-height suspension and dampening control. Riders can choose from two separate ride heights and two shock damping styles for each ground clearance setting. The brakes of the Ferrari V4 superbike concept consist of radial mounted discs and twin calipers up front. Both front and rear brakes are electronically operated and computer controlled to provide optimal braking under all road and weather conditions.

A weatherproof touch screen display is mounted flush into the top of the fuel tank, directly in front of the rider. From this interface the rider can manage bike systems or monitor information and diagnostic information, including; radio, GPS, anti-theft device, RPM, speed, and current gear.