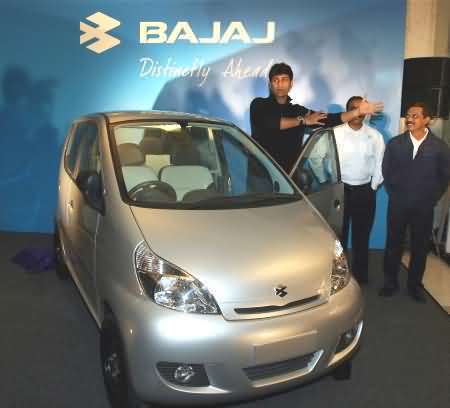 Bajaj auto will launch world’s cheapest car,its low cost car jointly manufactured with Renault and Nissan with the price tag of $2,500 only. Bajaj Auto showcased the concept of its small car by displaying the car at the 2008 Auto Expo.

Ghosn said: “In India , Renault and Nissan are developing an ultra-low-cost vehicle with the Bajaj group, benefiting from its expertise in light vehicles and knowledge of the Indian market.We are combining our strengths with Nissan, notably in India , Russia , Brazil and Mexico”. “The alliance product strategy has been finalised in India and Russia , and Renault and Nissan will pool their production capacities and platforms there to fully deliver on these developments,” he added.

But,there are rumors that the project also got delayed as partners were stuck on pricing of the car as Bajaj wanted a car that would sport high mileage and low maintenance, While Renault wanted a low-cost car.