Mahindra 2 Wheelers has launched new intelligent bikes 110cc Centuro and Pantero. Mahindra re-enters into the motorcycle segment by their self made indigenous bikes showcased in Mumbai. Mahindra 2 Wheelers Centuro and Pantero are 110cc bikes which is the most uncertain section of motorcycle market as Hero Splendor, Honda Dream Yuga and Bajaj Discover are other bikes which hold the firm position in this segment, lets see what new in these new launches by Mahindra. The company has developed the Centuro with new features not seen before on any Indian motorcycles. 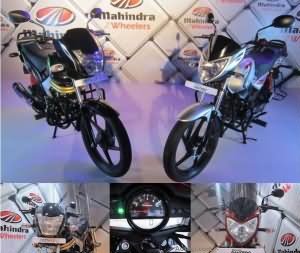 Centuro and Pantero are not the first bikes launched by Mahindra 2 Wheelers. Its first motorcycle launched in 2010, the Stallio but it was forced to withdraw from the market following weak consumer demand and having technical faults. With the launch of the new bikes Mahindra 2 Wheelers wants to fetch some this 110cc motorcycle market segment in India.“Pantero should be out in the next couple of weeks and Centuro a few weeks thereafter,” said Anoop Mathur, president, two wheeler sector and member of the group executive board, Mahindra & Mahindra Ltd.

Mr Mathur, however, did not disclose the prices. Designed completely in-house at the Mahindra R&D Centre in Pune and powered by the MCi-5 engine manufactured at the company’s Pithampur facility in Madhya Pradesh, the motorcycle models possess intelligent and class-defining features targeted at distinct consumer segments, the company said.

The company has invested Rs. 100 crore in the research and development of the products but “it is difficult to give total investment in product development as there is a lot of common platform sharing”, Mr Mathur said.