Honda’s latest electric car 2013 Honda Fit EV provides all necessary speed and excitement but Honda is building only 1,100 cars over two years, those will be leased in California and Oregon starting next month and then in six East Coast cities, including Boston and New York, in 2013 also grab some zero-emission credits in California . So advise is that, stop looking new 328i, this time Honda really wants you to participate in this electric car experiment Honda Fit EV, Or rather look for the Hybrid version already running in Europe.

Honda’s other hybrid and alternative fuel cars, the natural-gas-powered Civic and the hydrogen-powered FCX Clarity.

The Fit EV’s most obvious competitor is the Nissan Leaf, which is available nationwide in more reasonable numbers — nearly 10,000 sold last year — and which also has that benefit of actually being able to be purchased should you want one. (Remember that when you lease any EV, the manufacturer takes the $7,500 tax credit to reduce the monthly price; if you don’t buy it, you can’t claim it.)

Price and availability aside, the Fit EV feels like it’s ready to take on the entire country, not just a handful of states. Here’s what we thought, based on our rough hour behind the wheel. 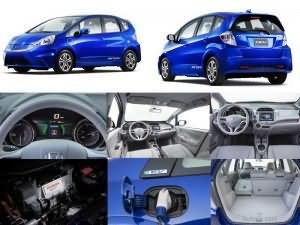 Awesome acceleration: The Fit EV, unlike the Leaf, has a sport mode that extracts the full 92 kilowatts available from the 20-kilowatt-hour lithium-ion battery. We mashed the throttle at every opportunity and were never disappointed. It’ll beat almost any 4-cylinder compact off the line.
Excellent brake feel: Hybrids and EVs slow down by using only a small portion of the brake pads. In moderate braking, the friction of an electric generator, used to recharge the batteries, is enough. But this often leads to an inconsistent or artificial feel under your foot. Not with the Fit EV. This is perhaps the most natural, progressive braking system we’ve sampled in an electric car, and it’s very reassuring over repeated hard stops.

Faster charging: We couldn’t verify any range or charging claims, but Honda says the battery can be fully recharged from dead to full in three hours on a 240-volt connection. The EPA-adjusted range is 82 miles, about that of the Leaf. The Fit EV uses a higher-capacity inboard charger that lets it suck more juice in the same amount of time. Whether it reduces battery life is another issue, but reducing downtime is a big plus.

Lesser materials: While the interior is quiet at high speeds, the overall quality leans toward economy versus the “business-class” finish of the Leaf. Plastics and assembly aren’t as good, nor is the low-resolution, calculator-like infotainment system, which looks and functions years behind the competition. For the price, the Leaf comes with more standard, useful features such as LED headlamps, heated rear seats, a heated steering wheel and keyless entry with push-button start, though Honda’s smartphone application and key fob, which lets the driver switch on the climate control from afar, look promising.

Stability and grip: The Fit’s quick steering and light, nimble chassis remain intact, even with a few extra hundred pounds of batteries. But the low-rolling-resistan​ce tires don’t have enough grip. They chirp constantly. On a back-to-back autocross test, the Fit EV was less stable and predictable than the wider, longer Leaf. It felt that way on the highway, too.

Price: OK, we’ve already mentioned this, but for double the price of a regular Fit, you get only a quarter of the range. The technology is great, yet it’s just not acceptable for the mass market. The Honda Fit Hybrid, on sale in Europe and Japan, could solve that in a hurry. (source:MSN)